Before the 18th Century, harbors mattered a lot. They allowed trade, and explain why the cities in the current Netherlands became rich, despite the relative lack of natural recourses. In the 19th Century, canals and railroads were important. More recently, highways have mattered a lot--Ed Glaeser has written on how highway spending helps explain differences in urban growth.

But airports may be what harbors once were. I have a recent paper that looks at differences in population and employment growth across metropolitan areas: education matters, climate matters, and airports matter, a lot.

Here is the paper's conclusion:

This paper sought to find a relationship between airport activity and economic development, and it found one. Passenger boardings per capita and passenger originations per capita in the nation’s largest metropolitan areas are powerful predictors of population growth and employment growth. This is the case after a number of controls are put in place, and survives after an attempt to control for simultaneity issues. Beyond statistical significance, the magnitude of the coefficient on boardings per capita indicates that the magnitude of the effect of passenger boardings on these two measures of economic development could be rather large. It might particularly suggest that where airports are constrained by capacity (such as they are in Chicago, Boston, New York and Los Angeles), adding to capacity might well have an important economic development impact. That said, these results do not suggest that every small city should run out and build a large airport.

Of course the results presented here are far from conclusive: they are, perhaps, among the first of their kind (this paper was written contemporaneously with Brueckner 2003), and are therefore subject to far more scrutiny. Nevertheless, their statistical significance is sufficiently strong that it survives a large variety of alternative specifications. The results are also consistent with the findings in Brueckner.

The policy implications of this finding are therefore quite important. The political economy of airports is very much a function of their governance structure. The cost (at least the perceived cost) of airports to members of a community is highly concentrated geographically, while the benefits tend to be diffused throughout the community. Airports are sometimes under the control of local units of government, such as city councils or county boards. When this is the case, representatives whose districts include an airport have a strong incentive to become members of the airport authority. Consequently, decisions about airports can be based on parochial interests, even if the total benefits of the airport to the economy exceed the cost. Should air traffic be a large determinant of economic success, it is entirely possible that the benefits of new or expanded airports exceed costs.

Yet we have observed that in many places (San Francisco, Boston, Milwaukee), interest groups have worked to inhibit runway expansion, while in other places (Chicago), local political squabbles have prevented any number of potentially reasonable plans for expanding airport capacity from going forward in a timely manner. All this suggests that airport policy might best be made regionally, rather than locally. Of course, the regional policy would have to include a scheme for compensating those injured by airport expansion. But if the regional benefits of airport development are large, the costs of fair compensation should be easy to finance.

The paper is available on the GW Web Site. http://www.gwu.edu/~business/research/workingpapers/Airport%20GW.pdf
Posted by Richard Green at 6:54 PM 4 comments:

A Short Quote in Business Week 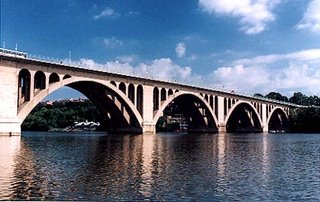 Slate today has gorgeous pictures of my favorite bridge--the George Washington Bridge. The bridge is a masterpiece of architecture and engineering, and was completed at the time my father was born. It also helped create suburban New Jersey.

Bridges seem politically unpopular right now--they only seem to get built (or proposed) where they aren't necessary. In my town, for instance,

there has not been an additional bridge built across the Potomac in nearly 40 years, despite the fact that the metropolitan area has doubled in size. The lack of bridges has created choke-points in the regional transportation system; choke-points that make people unhappy throughout the region, but that people don't seem to want to do anything about. I would guess that a couple of more bridges from the District into Arlington would easily pass any cost-benefit test, but they flunk the political test.

Perhaps the reason for this is that we built too many ugly bridges. The older bridges across the Potomac--Memorial Bridge, Key Bridge and Chain Bridge--are all quite beautiful. Don't take more word for it--the picture on top is of Key Bridge, the one just below it is Memorial Bridge.

Compare these with the 14th Street Bridge: 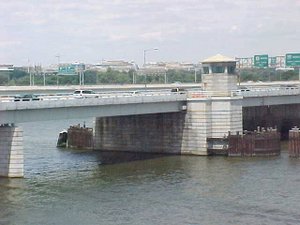 It is not hard to understand why people don't want more of these.

But bridges have made lives better for people--they have relieved congestion and, because they open up more urban land for development--reduced housing costs. While some urban planners sniffed that the post World War II suburbs of New Jersey and Long Island and Northern Virgina were banal, they also allowed the emerging middle class the ability to own houses at reasonable cost. These places would not exist in the absence of bridges.
Posted by Richard Green at 4:52 AM 6 comments:

In the Department of Self-Promotion

I am quoted in Robert J. Samuelson's newsweek column.
http://www.msnbc.msn.com/id/15173465/site/newsweek/page/2/
Posted by Richard Green at 7:38 PM No comments:

Why I love Keynes

This is a really wonky post, but after talking with a reporter today about house price indices, I couldn't help myself. The most commonly cited "constant quality" house price indices come from Case and Shiller, and from the Office of Federal Housing Enterprise oversight. These indices attempt to follow the price of a particular house at a particular place over time. To explain how they work, I will lift from my book with Steve Malpezzi:

Repeat Sales Price Indexes
Repeat sales indexes are estimated by analyzing data where all units have sold at least twice. Such data allow us to annualize the percentage growth in sales prices over time. These are time-series indexes in their pure form. They do not provide information on the value of individual house characteristics or on price levels. They have the advantage of being based on actual transaction prices, and in principle allow us to sidestep the problem of omitted variable bias. However, units that sell are not necessarily representative of all units. Sometimes it's difficult to tell whether a unit retains the same characteristics across time. For example, remodeling could change a house’s characteristics.
The best way to understand how repeat sales indexes work is to look at an example. Figure 2.15 shows a graph of 17 properties that sold twice in the Shorewood Hills neighborhood of Madison, Wisconsin, in the late 1980s and early 1990s. Each property is numbered from 1 to 17, and each property appears twice. The Y-axis is the logarithm of the selling price of the unit.
We can think of the repeat sales estimator as an attempt to measure the average slope of the lines in Figure 2.15, year by year. In a classic paper, Bailey, Muth, and Nourse (1963) illustrated how to compute this using regression methods and a larger sample.
One way to motivate the actual technique used to construct the repeat sales index is to start by reconsidering the hedonic model. Consider a simple semilog hedonic equation
ln P = Xb + b1D1 + b2D2 + b3D3 + b4D4
where P is the value or rent for the unit, and where the vector X includes all the relevant characters, including a constant term; and the time dummies Di represent periods that follow the initial base case period.
The vector X represents a list of housing and neighborhood characteristics that would enter a hedonic equation. The vector D is a series of dummy variables representing the time periods under consideration. These could be months, quarters, or years, depending upon the type of data at hand.
Consider a house, “A,” that sells in periods 2 and 4 (period 0 is the base year). In period 2, we calculate:
ln PA2 = Xb + b1D1 + b2D2 + b3D3 + b4D4
= Xb + b2D2
since D1, D3, and D4 = 0. And of course, by similar reasoning, in period 4:
ln PA4 = Xb+ b4D4
Then, by subtraction, we find:
ln PA4 - ln PA2 = Xb + b4D4 - Xb - b2D2
= b4D4 - b2D2
This is for a representative housing unit that sells twice. Given a sample of such units, we want, in effect, the “average” b4 and b2. (Recall that regression is, in effect, estimating a series of conditional means.) Clearly, by subtraction, the characteristics vector drops out, as do the dummy variables for periods in which no transaction takes place.

Case-Shiller actually does a better job of keeping quality constant than OFHEO, but OFHEO has more coverage (I think). I will explain why in another post.
Posted by Richard Green at 6:46 PM 1 comment: