Why it is hard to imagine consumption reigniting.

Mark Thoma wonders about whether consumption will come back any time soon.

A graph making the rounds uses the Federal Flow of Funds data to look at the ratio of Household Debt to GDP--the ratio rose from around 60 percent as recently as 15 years ago to more than 100 percent now. If households begin reducing their leverage back toward the long-term average, it will depress consumption for three reasons:

Debt service payments will rise when interest rates rise, and so discretionary income will be lower than it was when households had less leverage ( we are getting some relief right now because of very low interest rates on debt tied to LIBOR or the prime rate).

Households will not take on new borrowing to support spending.

Households will in fact be amortizing their current debt (meaning they won't spend).

The counter-argument is that average household net worth relative to GDP remains quite normal by historical standards. But here is where the skewed distribution of wealth is a problem. I am reasonably sure that when the next Survey of Consumer Finances is released for 2010, median household net worth will be down. Corelogic says that one in four households with mortgages has negative home equity--this would be about 18 percent of owner households (about 30 percent of owners have no mortgage). If we combine this with the fact that 1/3 of the country rents, this means that the median households has little or no home equity. The median household is not loaded with financial assets, either. According to the 2007 Survey of Consumer Finances, only half of families have a retirement account, and only 21 percent owned stocks. Put this all together, the median household is not in great shape financially, and the median household consumes a higher share of its income than higher income households.

One more back of the envelope calculation on getting us back to a steady state: suppose the steady state household debt to GDP ratio is 70 percent. If the national economy uses 5 percent of its income to pay down that debt (which is about 7.5 percent of current consumption), at an interest rate of 8 percent, it would take 9.2 years to de-lever down to the steady state ratio.

[Update: the above back of the envelope assumes six percent nominal growth. If nominal growth is less, it will take longer].
Posted by Richard Green at 7:25 PM 10 comments:

Over the holidays, I have learned from my parents that there are homeowners associations that ban drying clothes on clotheslines and make it difficult to place solar panels on houses. I did a google search on the issue, and learned to such hostility toward environmentally friendly practices is fairly widespread.

This sort of thing has got to stop. While apparently some states have passed laws that ban homeowners associations from prohibiting solar, the laws are sufficiently vague that they can be circumvented.
Posted by Richard Green at 1:49 PM 6 comments:

Sometime around 2006, when I was an Associate Dean at George Washington University, I was asked to be part of a team to go to Dubai to explore the possibility of opening a degree program there. After spending three or four days there and running some financials, our team decided that unless GW got a heavy subsidy from Dubai, it was economically a non-starter for us to set up something. Our team's judgments is looking pretty good right now.

The more interesting part of the story, though, is a conversation I had with a professor at one of the universities there. I asked about academic freedom in Dubai, and he said there was plenty. I then asked whether it would be OK to raise in class a discussion about whether the Emir had shown good judgment in building Burj Dubai, the still incomplete tallest skyscraper in the world. The look on his face told me all I needed to know.
Posted by Richard Green at 2:39 PM 8 comments:

The Pleasures of Teaching

Last night, I heard 10 presentations from my MBAs on TARP, TALF, PPIP and HAMP. I learned at least one thing from every one of them.
Posted by Richard Green at 8:44 AM 3 comments:

He uses the Federal Flow of Funds to look at Commercial Real Estate Loans Outstanding as a fraction of GDP. When the share goes well above the long term mean, bad stuff in commercial real estate seems to ensue. 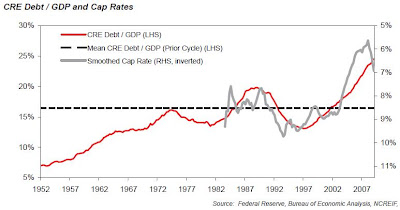 This is forthcoming in AER:

This paper provides the first credible evidence on the economic value of the certification of green buildings-- value derived from impersonal market transactions rather thanengineering estimates. For some 10,000 subject and control buildings, we match publicly available information on the addresses of Energy Star and LEED-rated office buildings to the characteristics of these buildings, their rental rates and selling prices. We find that buildings with a green rating command rental rates that are roughly three percent higher per square foot than otherwise identical buildings - controlling for the quality and the specific location of office buildings. Ceteris paribus, premiums in effective rents are even higher - above six percent. Selling prices of green buildings are higher by about 16 percent. For the Energy-Star-certified buildings in this sample, we subsequently obtained detailed estimates of site and source energy usage from the U.S. Environmental Protection Agency. Our analysis establishes that variations in the premium for green office buildings are systematically related to their energy-saving characteristics. For example, an increase of ten percent in the site energy utilization efficiency of a green building is associated with a two percent increase in selling price - over and above the 16 percent premium for a labeled building. Further calculations suggest that a one dollar saving in energy costs from increased thermal efficiency yields roughly eighteen dollars in the increased valuation of an Energy-Star certified building.

I find the value results compelling; the rent results less so (the t-stat on their best specification is not that impressive given their large sample size). But in any event, an important contribution.
Posted by Richard Green at 11:07 AM 5 comments:

Is there room for more than one Chicago?

Last weekend, for the first time since leaving the Midwest in 2002, I spent time enjoying Chicago. The best part was visiting my daughter, but the second best part was seeing Millennium Park, the New Modern Wing of the Art Institute, and just plain walking around and eating in Chicago.

Within one-half mile of Lake Michigan, from Cermak Road on the South to the Evanston city limit on the North, Chicago is an Urbanist's dream. It is walkable, it has more impressive urban landscapes than any other city I know, transit is good, there is well-tended and contiguous green space, and, of course, the magnificent lakefront.

So why don't we have more Chicagos? Part of the reason is that countries have systems of cities, whose size seems to kind-of-sort-of follow Zipf's law, and so there is room for a limited number of cities of Chicago's size. But one could ask why we don't see Chicago in miniature more often. To the extent that it is preferences--that there are only a limited number of us who like the features of places like Chicago--the fact that there are few Chicagos is nothing to worry about.

But I suspect that it has to do more with policies--zoning that requires separation of uses, low densities, large setbacks, etc. Particularly problematic is the hostility many communities show toward multi-family housing, and the silliness of greenspace requirements that encourages many little playgrounds but fails to develop large parks. The again, policies are put into place by elected officials, so maybe the absence of Chicagos does reflect preferences (or prejudices). And that's too bad.
Posted by Richard Green at 4:29 PM 16 comments:

But other borrowers insist on paying their mortgages, no matter what. These mortgages continue to be worth something like their par value. Financial institutions do not want to modify their loans. But if those who pay their mortgages know that those who don't will get a modification, they will change their behavior.

So the optimal program (from the lender's perspective) would be one that identifies those who wouldn't repay, and then grant those people a secret modification. I can't figure out how to either (1) how to do the identification or (2) write to contract binding the borrower to secrecy.
Posted by Richard Green at 5:25 PM 9 comments:

I was surfing the MIT CRE web site this afternoon, and the following picture caught my eye: 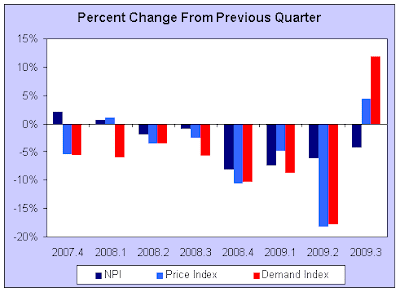 The MIT index is a hedonic transactions based index based sales from the NCREIF index, and it attempts to find price movements of a "typical" property. The interesting thing is that the Moody's Commercial Property Index is still falling: 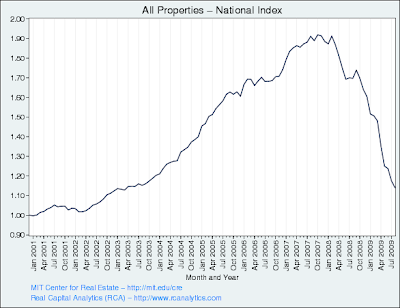 So the question is whether the MIT TPI is a leading indicator. My sense is actually that Apartments and Industrial Real Estate will come out of this thing earlier than other generic types, but I am not sure that anything is really at bottom yet. In particular, the MIT folks are showing that demand and supply are coming closer to lining up, but there is still excess supply nationally in the industrial, office and retail sectors.
Posted by Richard Green at 2:44 PM 21 comments:

The problem with Goldman bonuses

Beyond the generic problem that bonuses are usually based on an un-risk-adjusted IRR, the problem with bonus for banks in general, and Goldman in particular, is that the government is backing short-term bank borrowing, and so banks can borrow at very depressed rates and make a lot of money on spreads. This seems more like playing the government than playing the market.
Posted by Richard Green at 10:24 AM 58 comments:

At the ULI meetings, I am hearing that banks are not willing to repeat their behavior in the last down market (the early 1990s): they are afraid that if they sell their assets--commercial real estate loans--at a discount, they will miss out on upside opportunity. Instead, they are "extending and pretending," in the hope that values will rebound to levels above mortgage balances. I overheard one person say, "cap rates have to go back down again. right?"

Not necessarily. This paper by Phillip Connor and Yougo Lang shows that cap rates tend to stay in the eight range over the long term--to think they will return to the fives is almost certainly unrealistic. Even if net operating income had stayed constant--and it has fallen--the increase in cap rates from 5 to 8 implies a 37.5 percent reduction in value. It is going to be a long time before loans with LTVs at origination in excess of 75 percent will be right-side-up again.
Posted by Richard Green at 1:30 PM 6 comments:

We may be in bad shape fiscally, but at least we're happy (h/t Richard Florida)

According to Gallup, six of the country's 10 happiest congressional districts are in California. The happiest, the California 14th, is between San Francisco and Silicon Valley.

I live in the 49th happiest district; the least happy is the Kentucky 5th, in Appalachia. Makes sense.
Posted by Richard Green at 4:05 PM 3 comments: