Posted by Richard Green at 10:16 AM No comments:

Why not worry about the deficit right now?

Because if I did my math right, Federal Government interest payments are at a long-term low relative to GDP. [Update, after looking more closely, I see that the source of the data--the US Treasury--includes state and local interest payments as well]. Consider the chart below: 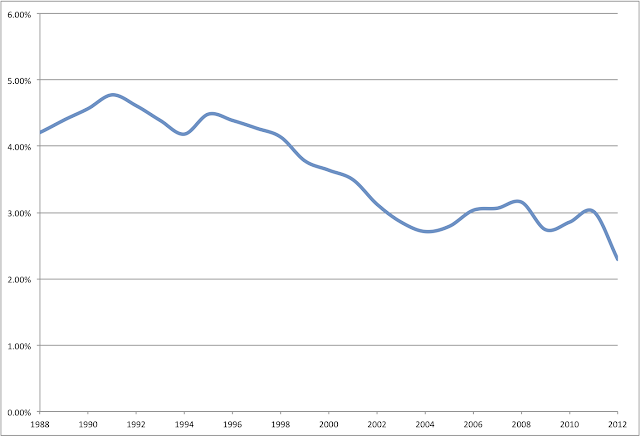 Note that interest rates would have to double for us to be in the situation we were in the late 1980s, the end of the (ahem) Reagan Administration.  Do we ultimately need a steady state in which debt to GDP doesn't rise?  Absolutely.  Just not tomorrow.

Posted by Richard Green at 8:49 PM No comments:

This video presents what the American people consider to be the ideal wealth distribution.  At 2:47, the narrator notes that under this ideal distribution, "the wealthiest folks are about 10 to 20 times better off than the poorest Americans."

George Orwell in Why I Write:

2. Incomes. Limitation of incomes implies the fixing of a minimum wage, which implies a managed internal currency based simply on the amount of consumption goods available. And this again implies a stricter rationing scheme than is now in operation. It is no use at this stage of the world's history to suggest that all human beings should have exactly equal incomes. It has been shown over and over again that without some kind of money reward there is no incentive to undertake certain jobs. On the other hand the money reward need not be very large. In practice it is impossible that earnings should be limited quite as rigidly as I have suggested. There will always be anomalies and evasions. But there is no reason why ten to one should not be the maximum normal variation. And within those limits some sense of equality is possible. A man with Ј3 a week and a man with £1,500 a year can feel themselves fellow creatures, which the Duke of Westminster and the sleepers on the Embankment benches cannot.

Posted by Richard Green at 12:23 PM No comments: