Why Public Housing is Scorned

I came across this on You-tube:

This comes from the film Koyaanisqatsi (a Hopi word meaning life out of balance). From roughly minute 3 to minute 6 of this clip are shots of the notorious St. Louis public housing project Pruitt-Igoe, a subsidized housing project that was so awful, it was never more than 60 percent occupied. The eleven building complex of nearly 3000 units was torn down before it was 20 years old.

In a terrific essay ( http://www.soc.iastate.edu/sapp/PruittIgoe.html), Alexander Von Hoffman argues that even a well-designed Pruitt-Igoe would have been a failure, because St. Louis had been (and in fact continues to be) a dieing city. And so it has; the 4th largest city in the country in 1890 is now not among the top 50.

But Pruitt-Igoe was a representation of the modernist movement at its worst. The buildings were faceless and difficult to cool. Public spaces were neglected and shadowy, and bred crime. The shame is that the complex gave high-rise living for the poor a bad name. High rises can work well, so long as they are well maintained and managed (some of the most desirable places to live in Chicago, Vancouver, Hong Kong and, of course, New York are high rises). More important, the complex lent such a stigma to public housing that it eliminated it as a mechanism to house the poor.

Malpezzi and I have written that the public housing that the US has built has been invariably inefficient as a means for housing low-income people in expensive American cities. This doesn't necessarily mean that it must be so, but the disasters of Pruitt-Igoe and other large scale public housing projects (Cabrini-Green and Robert Taylor Homes in Chicago are almost as notorious) means we might never find differently.
Posted by Richard Green at 5:54 PM 3 comments:

Recruiting for MBAs in the Middle East 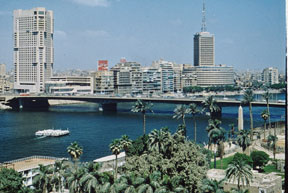 I am home from recruiting MBA students in Dubai and Cairo.

Cairo is one of the greatest cities I have ever visited; the architecture, street life, and, oh yes, the antiquities are beyond compare. The people there were exceptionally hospitable, and the streets are safe, if heavily littered. I bought some cool if corny papyrus paintings; the Nefertiti will hang in honor next to my velvet Elvis.

I met great potential students in both Dubai and Cairo, and would love to bring at least a half-dozen from each place to George Washington. The sticking point, in their minds, was getting a student visa. The perception was that getting student visas to the US is too much of a hassle; as a friend of mine at National University of Singapore said to me, the difficulty in getting visas to the US has made recruiting at NUS much easier. Don't get me wrong, NUS is terrific (I have very much enjoyed my two visits there), but I would rather students come here.

My reasons for this are not entirely altruistic. I think having college and graduate students coming to the United States is extremely important to our image in the World. While people in Egypt complained bitterly about US Middle-East foreign policy, they nevertheless wanted to come to America. In the 17 years I have been teaching (has it been that long?), I have seen generation upon generation of international students transformed by their experience in America--and transformed for the better. Once students are here for a few years, they often appreciate America's openness, and generosity, and they embrace American ideals. They can't help but feel better about America's place in the world, even as they continue to oppose US foreign policy. In some small way, this must leave us safer.

A State Department Official in Cairo told me he get could get visas for students accepted at US universities in 3 days. If this is really true, I am optimistic about increasing the flow of students from Morocco to Jordan to Oman into the United States. This would benefit us all.

On my eight day trip, I took one morning off. This is what I saw: 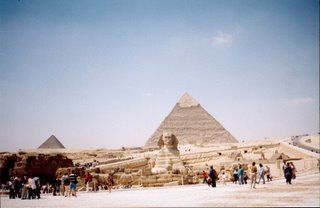 I would say that if you get a chance to see one wonder in your life, this should be it. Astonishing.
Posted by Richard Green at 8:35 PM 17 comments: 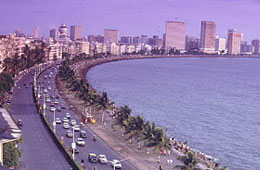 I am currently in Mumbai, recruiting MBA students. This is my second trip to this marvelous, vibrant, horrible city. When I walk the streets here, I think about Dickens' London.

The city is remarkably entrepreneurial . There are people selling stuff everywhere, and lots of cottage industry, even in the slums. Kids are going to school here in much larger numbers than 30 years ago, and so literacy has risen dramatically. One sees fashionable shops, and the street along the sea, Marine Drive, could become among the most attractive in the world, comparable to Lake Shore Drive in Chicago.

Yet it is a city of eight million in which 20 percent have no access to toilets; in which the largest slum in the world sits; in which commuter trains run with 4 to 5 times the number of passengers for which they were designed; in which live many pavement dwellers. Many workers do unspeakably difficult tasks--such as breaking up old ships with hammers--for about $2 per day.

Some of the horrors here are a function of the fact that this remains a city that, despite substantial progress, remains extraordinarily poor. But land use policy here makes things worse. Two issues stand out in particular. First, government and quasi government enterprises own vast swatches of land here--the old port is one example. To say this land is underutilized is a severe understatement. Mumbai badly needs to use its developable land--right now land here is as expensive as it is in Montgomery County Maryland, while incomes here are about 1/50th of what they are in Montgomery County.

Second, there is a hostility here to tall buildings. But the Mumbai peninsula, with 150,000 people per square mile, is twice as dense as Manhattan. The only way people can be housed reasonably here is to build up. High rise housing had a bad reputation, I think, because of the ugliness perpetrated in the former Soviet and Soviet-satellite cities. East Berlin was not very attractive (nor was most of the high-rise public housing built in the US). But Hong Kong, Singapore, New York and Chicago demonstrate that high rise housing can be attractive. Shanghai has used high-rise housing to rapidly improve housing conditions there in the past 15 years.

One could talk about a lot of other things Mumbai needs to do to move forward--infrastructure development--including good sidewalks--needs to be on the top of the list. But giving people more room to live might do more than anything else to improve living conditions here.
Posted by Richard Green at 9:53 PM 4 comments:

We have a new president: Steven Knapp, who is currently provost at Johns Hopkins. I was hoping against hope that our new leader would be the provost of a World-class research university, and that is exactly what we got. I am excited.
Posted by Richard Green at 9:50 PM 2 comments:

Too much fun; Weird Al Yankovic - White and Nerdy