I grew up in La Crosse, Wisconsin, which sits at a particularly beautiful spot on the Mississippi River.  It is in the middle of an area called the driftless region, because unlike most of the upper Midwest, glacial "drift" did not sheer off topographical features.   The Mississippi thus has dramatic bluffs on both sides of it at La Crosse.

A 50-year old interstate highway bridges crossed the river just north of La Crosse; to say its aesthetics didn't match the surrounding area would be understatement. 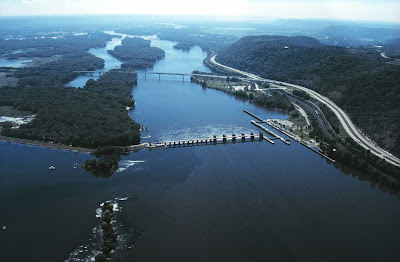 Because the bridge had reached the end of its useful life, the Minnesota Department of Transportation, perhaps not wanting another bridge to fall into the Mississippi, decided to replace it. But the replacement is hardly better. 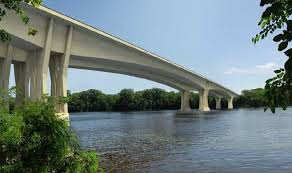 When I read that the bridge was going to be replaced, I was hoping for something along the lines of the Stan Musial Bridge just north of St. Louis. 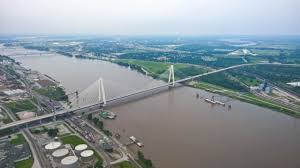 Here's the problem.  The bridge between Minnesota and Wisconsin cost around $190 million to build.  The Musial Bridge cost slightly under $700 million.  The bridge at La Crosse has traffic about about 26,000 vehicles per day; the bridge at St. Louis has 40,000 per day.  Is it worth more than doubling the price of a project per user to make it pretty instead of pedestrian?  I actually don't know.

Posted by Richard Green at 10:42 AM No comments:

Bankers like to complain about Basel III capital rules. Among other things, they argue that the rules make construction lending more expensive.  A nice summary of those rules notes:

As part of the standardized approach, the final rule requires banking organizations to assign a higher risk weight of 150% to any high-volatility commercial real estate (HVCRE) exposure, defined as “a credit facility that finances or has financed the acquisition, development, or construction (ADC) of real property.”

This means that lenders must put more capital behind construction loans than other types of loans. Bankers argue that because capital (in the form of paid-in equity and retained earnings) gets paid after debt, it requires higher returns than debt, and therefore higher capital requirements lead to higher lending costs.

In a pure Modigliani-Miller (MM) world, where capital structure is irrelevant to corporate valuation, this argument doesn't make sense.  While debt is cheaper than equity, firms with less leverage are less risky than firms with more leverage, and so as the amount of debt used falls, the return on equity investors require also falls.

But while MM is helpful for thinking about capital structure, it makes some unrealistic assumptions. The most important MM assumption for thinking about capital and banks involves the cost of financial distress.  MM in its purest form assumes the problem away--that debt will always be repaid, and so costs arising from potential default are irrelevant.  One of the current presidential candidates shows that this assumption is problematic.  When lenders (in this case, those who lend money to banks, such as depositors) think there is a chance they will not be repaid, they add a default premium to the cost of debt, and hence discourage leverage beyond some critical point.  Thus the market disciplines the issuance of debt.

Yet for banks who rely entirely on deposits for funding, the MM assumption about the absence of default costs is realistic, because deposits are nearly all guaranteed by FDIC (the exception is corporations who briefly deposit money beyond the FDIC maximum for the purpose of paying workers). Banks (except for those that have bond financing as well as deposits) face less market discipline, and so get debt more cheaply than other businesses.  Let me pause here to note that to me the benefits of deposit insurance have demonstrably outweighed the costs.

To return to the major point, however: for banks that rely on deposits for funding, higher capital requirements do indeed raise costs, because they limit the amount of subsidized debt they are permitted to use.  For those of us worried about an absence of new construction in housing, this is a problem, because while Basel III does raise cost, it is doing so by attempting to prevent banks from avoiding market discipline.  In other words, we are now probably closer to a world in which banks pay a more efficient price for funding construction loans than we were before.  And compared to what we are used to, that price is expensive.

I would very much welcome other thoughts about this.

Posted by Richard Green at 11:12 AM No comments:

Use up-zoning, but don’t give it away

Los Angeles has three interrelated issues: for a city of its size, it is not, by world standards, very dense (see Figure 1.  The pictures of London and Los Angeles taken from the same height—the two metros have similar populations, but settlement in LA takes up far more land); its housing is expensive relative to its incomes; and its infrastructure (transport and water) should be better.  The absence of density has created a land shortage, which in turn has driven up land (and therefore house) prices, but density is not politically popular, in part because of the perception that Los Angeles hasn’t the infrastructure necessary to support more density.


The government of Hong Kong uses its greatest asset—land—to fund its operations, and particularly infrastructure.  When the Special Autonomous Region grows, the government puts undeveloped land up for bid, and the highest bidder at auction wins the land.  The reservation price of the land is sufficient to finance the infrastructure needed to support the new development.  Because Hong Kong uses well designed auctions to sell properties, it extracts substantially more revenue than it would if it went through an RFP process.  The revenue allows the government to subsidize housing for more than half the residents of the SAR.

While the city of Los Angeles does not own a lot of land (relative to its size), it does effectively own a lot of development rights, in the form of air rights.  Some cities, such as New York, have given developers air rights in exchange for the production of deed restricted affordable housing (within the deeds, rents or prices are restricted to being affordable).  While the goals of the New York policy are laudable, there is some evidence that the newly created affordable housing crowds out older affordable housing (the same is true of inclusionary zoning policies).  A policy that extracted the maximum amount of revenue from developers in exchange for air rights would be more effective.  It would allow the city to fund the infrastructure necessary to support denser development, and/or acquire property for a housing trust fund that would allow for affordable purchase housing (this is essentially Singapore’s model), or provide subsidies to tenants.

We know auctions are an effective mechanism for the government to raise money; the federal government has generated far more revenues from the sale of the broadcast spectrum and drilling rights since it starting using auctions as its sales mechanism.

One final note—while Los Angeles needs far more housing, housing supply will not alone solve our affordability problem.  Large, attractive cities around the world all have high house prices.  Building a lot will mitigate the affordability problem, but not solve it.  To accommodate those workers that all cities need, LA will need to provide subsidies, which means it needs to generate revenue.  In a Proposition 13 world, where pure ad valorem property taxes are not available, using auctions for air rights might produce just that revenue.

Posted by Richard Green at 11:50 AM No comments:

Heather Schwartz, Raphael Bostic and I write about renting in NOLA

The piece is here.

...Between 2000 and 2014, our analysis — which we performed for the John D. and Catherine T. MacArthur Foundation when evaluating their 20-year affordable rental housing preservation initiative — shows that rental affordability has gotten substantially worse in virtually every major metro area. That is not just the case for the lowest-income households. It's no longer a New York City and San Francisco problem; rents are unaffordable in Cleveland, Miami and Portland, too.