Daniel Solomon, in his book, Global City Blues, makes a nice point about city blocks: of you want to have a vibrant street life, you need short blocks. San Francisco provides a nice natural experiment. Below is a Google Earth picture of San Francisco: 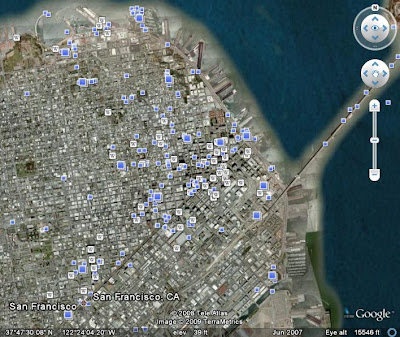 Notice that there are two grids: one is north of Market Street, and the other is south of Market (SOMA). The area north of Market is among the most inviting urban places I know for a walk; the area south of Market is more intimidating and, in some places, rather sketchy (although it must be said that the Tenderloin, which is north, is rather sketchy too--in the movie Milk, someone points out that among San Fracisco's leading problems is the smell of urine in the Tenderloin). In any event, there is no question that the street life in the northern grid is more vibrant.

What's the difference? It is fairly obvious that the grid north of Market is much tighter. For some reason, this makes it more humane.

I worry that this phenomenon will inhibit downtown Los Angeles from ever becoming a destination for pedestrians. The blocks are extremely long. Once a street grid is in place, it is hard to change it.
Posted by Richard Green at 4:56 PM