Has the Variable Rate Mortgage saved the European Mortgage Market?

Just as in the United States, many European countries have had large run-ups and crashes in house
prices. Consider the data from the European Central Bank below: one sees in particular large price increases and declines in Spain and Ireland. 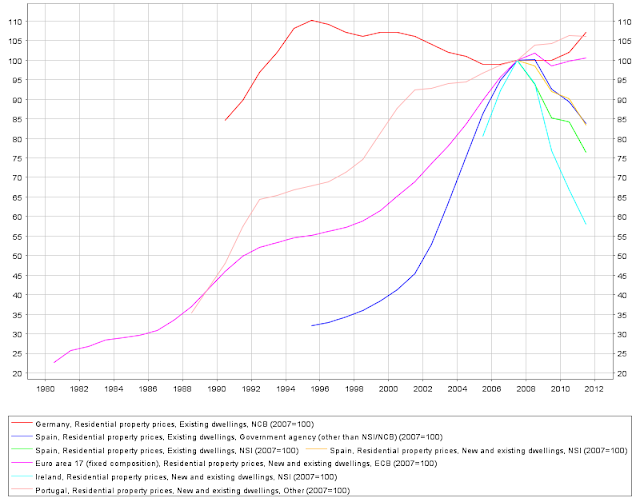 Remarkably, default rates in Ireland and Spain in 2009, while high by historical standards at 3.6 and 2.9 percent respectively, were substantially lower than in the United States, where the default rate was 13 percent (see Fiorante and Mortgage Bankers Association of America).  Dwight Jaffee has argued that this difference in performance is the result of the fact that mortgages in Europe give lenders recourse to the borrower.  I find it plausible that recourse matters, but not that it matters quite so much.  For example, while purchase money loans in California are non-recourse, refinance loans are not.  The preponderance of mortgages in California are refinance loans, and California's default rate is extraordinarily high.

So why haven't borrowers in Spain and Ireland defaulted more?  According to the European Mortgage Federation, more than 80 percent of loans in Spain and Ireland are variable rate mortgages.  As a consequence, as market interest rates fell, so too did mortgage interest rates.   The typical mortgage borrower in Ireland and Spain is currently paying considerable less than 4 percent on their mortgage. 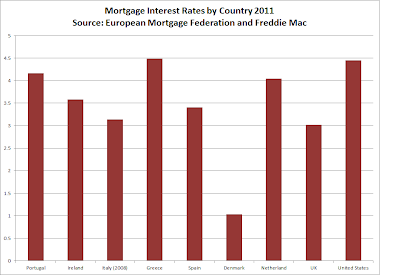 s
This has almost certainly been beneficial to Europeans, and suggests that robust TARP 2 program, where underwater borrowers can refinance their loans at lower interest rates, could help mitigate default.  On the other hand, as interest rates rise in Europe, we might have reason to become very, very concerned about defaults there in the months to come.
Posted by Richard Green at 4:06 PM

The variable rates might have given minor assistance in the downturn, particularly in the UK, but this is to miss the point entirely.

More Spain & Ireland are suffereing badly simply because their booms were so bad.

And this is the nub of the problem with your post. Germany, where VR mortgages are rare, didn't have a housing boom. And the US's first ever nationwide boom happened a shortly after you moved from fixed to variable rates as the norm.

Variable rates cause housing booms, primarily by transferring interest rate risk first to the home buyer, and ultimately to the state.

Willis - Pricing, liquidity and the control of dynamic systems in finance and economics - Section 6.

Variable rates got us into this mess, they should be illegal in any self respecting democracy.

Just to say this is very informative. This will keep readers more informed on real estate trends and news.

It's really helpful topic for usa's people .That's related to the Sandpoint Idaho real estate.Its and intrusting and and wounder full article.Thanks for sharing .....

its may be nice blog and very interesting to share about this.the variable rate mortgage saved the european mortgage market.it will be very useful to us.
dave lindahl

Hello, I would like to draw your attention to the publication of " 2015 - The big fall of Western real estate" anticipating the major trends affecting the real estate market now. As we arrived at a historical turning point, this book is a real tool for support on decision making, to know the trends and especially to know when to sell, when to invest or if it is better to rent ... http://www.anticipolis.eu/en_index.php

Anticipolis said...
This comment has been removed by the author.
12:07 PM

Amazing articles! I personally recommend this site to all my friends and co workers as well. Vancouver Home mortgage

its may be nice blog.... we have news about real estate investing...nice thoughts to share with us...
dave lindahl

Having a good mortgage rates can also make a good mortgage market cash flow and if the rates are stable there is a possibility that the number of home buyer hat get a mortgage to purchase a home is increase.

Great post, thank you for sharing this with us! american home mortgage servicing Attorneys General

Mortgage Service : This kind of easy solution for saving you thousands, in addition to shortening the term of this home loan, simply will involve altering your frequency of this reimbursements.

Mortgage modification programs are the answer to today's economic turmoil. Many homeowners wound up getting a loan that was difficult to afford during the good times, and now, have trouble making their payments. If you are experiencing severe financial hardship, look to a loan modification program instead of bankruptcy or defaulting on your home and find out if you can keep your home.

The size of an apartment or house can be istanbul real estate described in
square feet or meters. In the United States, this includes the area of "living space", excluding the garage and
other istanbul property non-living spaces. The "square meters" figure of a
house in Europe may report the total area of istanbul properties the walls
enclosing the home, thus including any attached garage and non-living spaces, which makes it important to inquire what kind of surface
definition has been istanbul real estate used.

It can be described more roughly istanbul real estate
the number of rooms. A studio apartment has a single bedroom with istanbul real estate
no living room (possibly a separate kitchen). A one-bedroom apartment for sale in istanbul
apartment has a living or dining room separate house for sale in istanbul
from the bedroom. Two bedroom, istanbul villa three bedroom, and larger
units are common. (A bedroom is defined as a room with a closet for istanbul villa clothes storage.)