They look at lending originations and loan performance on either side of the CRA thresholds.  If CRA encouraged subprime lending, one should see a discontinuity at the thresholds, but there is none. 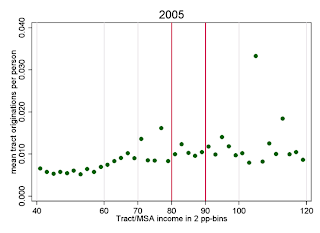 These are originations for 2-28 subprime loans.  Under CRA, lenders received credit for originating and funding loans in census tracts whose median incomes were below 80 percent of area median income.  If the CRA was inducing lending, we should see a jump in lending to the left of the 80 percent cut-off--there isn't (either visually or econometrically).  They find the same result when looking at pricing and default.
Posted by Richard Green at 4:10 PM

Sadly, some people will argue with these facts until they are blue in the face. I used to try to point the delusional to the facts about CRA but as the old saying points out "you can lead a horse to water, but you can't make it drink".

DAVID LINDAHL say that once you thing a real estate asset has a Encumbrance then browse the net and get a Realtor in that particular area and call and inquire what he or she may know about that real estate asset or location of the property, this will surely protect you from the future issues and head ache due to wrong move.