The V-shaped nature of the Fiscal Cliff Fix

Here is a first approximation of the change in effective tax rates [for a single taxpayer] as a result of the deal (the effective rates   are based on changes in payroll and income taxes). 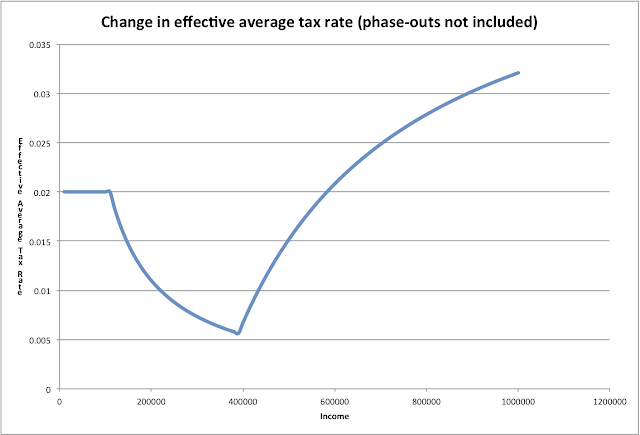 The builds in a 2 percentage point increase in payroll taxes us to the income cap of $110,100, and a 4.9 percentage point increase in marginal tax rates above $400,000.  The rates actually rise a teeny bit faster for those above the $400,000 threshold, because the tax on capital gains is increasing by 5 percentage points, but this doesn't change the basic point of the picture, which is that it is not until income reaches around $560,000 that the change in effective tax rates at the high end of the distribution match the rate at the low end. [note: y-axis is the change in effective tax rates].
Posted by Richard Green at 9:49 AM

Is this for a single taxpayer? If married/filing jointly, the 2 percent increase would also apply to wages earned by a spouse--potentially, to combined wages up to $220,000. In this case, the sudden drop-off would shift to the right and be steeper.

The Villa In Hyderabad for sale having floor with all modern facility like. Currently it is available for sale at very competitive price.

If you wish to buy, sell or rent property at Dwarka Delhi you need to take the help of the real estate agents, who are having a detailed knowledge about it. They will help you out to sort out the properties that can properly satisfy your needs and dreams.

jitendra thats so good i must contact u thnks for sharing

Property in Ghaziabad has become very much visible with the right moves altogether aspects of property expansion. Ghaziabad Property is on the path of growth. The vast expansion in the consumers spending of Delhi prompted a real estate and infrastructure multifarious...