I think I support a tax cut...

...for below median income households.

Mitt Romney infamously complained during his presidential campaign that 47 percent of Americans paid nothing for their government benefits.  What he really meant is that 47 percent did not pay federal income tax; they still paid lots of property, sales and FICA taxes.

A story by Jordan Weissman in Slate this morning underscored this fact; indeed, the story, in my view, buried its lede by focussing on the fact that the top one percent pay about 1/6 less in taxes as a share of income when compared with the 1950s.  To me, the most interesting thing was demonstrated in this graph by Piketty, Saez and Zucman: 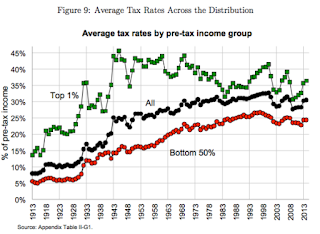 Taxes as a share of income on the bottom 50 percent of the income distribution have risen about 60 percent (from 15 percent of income to 25 percent).  This falls into the category of facts I didn't know that I should have known.
Posted by Richard Green at 7:44 AM