The other night, I was on a panel sponsored by the UC-Berkeley Alumni Association, the UCLA Anderson School and the USC Lusk Center and Marshall School of Business. One of the panelists was a business economist, and he claimed that the employment picture wasn't as dire as the media suggested. He also scoffed at the notion that there was underemployment, arguing that people generally consider themselves underpaid, and therefore, by extension, underemployed (most people in the audience did not agree that they were underpaid). He also scoffed at the concept of discouraged workers.

In light of this, I wish I had had the following graph on my flash drive: 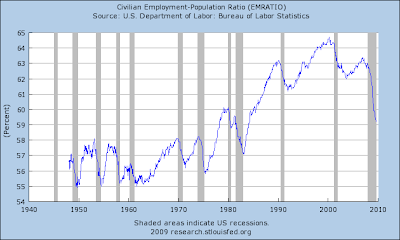 The employment to population ratio has fallen to less than 60 percent; it peaked at nearly 65 percent at the end of the Clinton Administration. The share of us working has dropped precipitously in the last two years to levels not seen since the Carter-Reagan recessions.

This panelist also complained about comparisons to the Great Depression. The only common comparison I know is that this is the worst recession since the great depression. Given that California's unemployment rate has just reached its highest level since 1940, the comparison seems apt.
Posted by Richard Green at 10:29 AM

All of that electronic printing during the late 90s and early 2000s doesn't seem like such a good idea now. The next bailout on the other side of the new bubble being inflated may be a doozy.

Casey Mulligan (U of C
hicago, who is part of the tag-team posting on the NY Times's Economix, has argued that the entire declioen in employment is a result of a switch in worker preference so that they now value leisure more highly. Krugman and DeLong have (rightly) evicerated this argument.