Austerity is a problem, but so is fear

Paul Krugman this morning argues that fear of fear is phony.  He is almost certainly correct that fear is not the number one problem at the moment--if I had to pick a number one issue, it would be austerity measures at the state and local levels of government.  Tracy Gordon of Brookings has a nice picture: 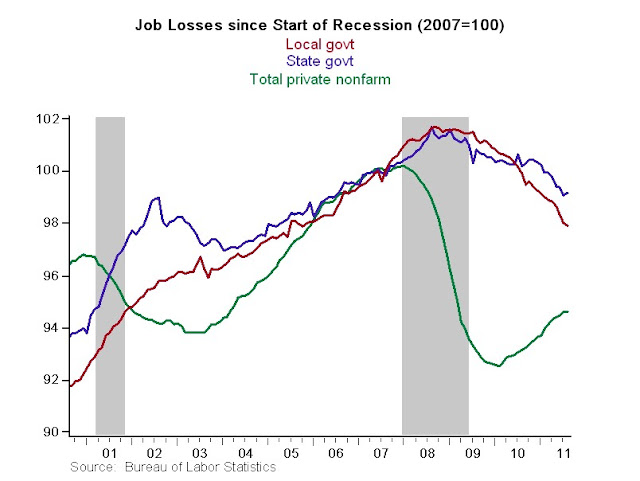 Cuts in state and local government jobs (police officers, school teachers, firefighters, DMV workers) are putting a drag on employment growth.  Moreover, this picture understates the problem, because total compensation to many state and local workers has been cut.

But I do think fear is part of the problem, at least in one sector of the economy.  It seems to me that there are business opportunities in lending that are going unanswered.  The pendulum for underwriting has swung so far to caution that according to the Flow of Funds Accounts, net lending declined in the second quart of 2011.  More specifically, net bank lending dropped by $181 billion on an annualized basis in the first quarter and by $129 billion in the second quarter.  Net lending is the difference between volume of new loans and volume of repayment of old loans. I do find it plausible that one of the sources of the tight lending environment is a fear of regulators.

One more point.  if it weren't for lending by the monetary authority, net lending in the second quarter would have fallen by $860 billion on an annualized basis.

I do think fear is part of the problem, at least in one sector of the economy. It seems to me that there are business opportunities in lending that are going unanswered. doral real estate

This is the acumen why absolute acreage agents are now acclamation their easily with aplomb because they can arrangement better.

Unknown said...
This comment has been removed by the author.
9:17 PM