California is getting richer..because it is becoming clubbier.

And so we see this currently in California.  Adam Fowler and Hoyu Chong of Beacon Economics looks at American Community Survey Data to look at net domestic migration in California.  More people are moving out than moving in, but it is the lowest income people who are doing the moving.  High income households are actually moving in. 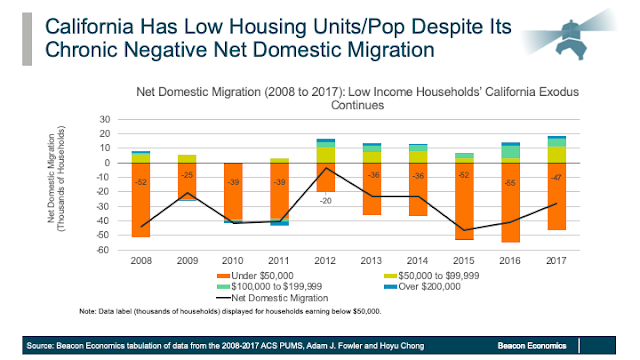 There is some irony here, because I often hear people authoritatively say that California's taxes and regulations are pushing wealthy people away.   We will have to see the impact of the curb on the state and local tax deduction on migration (that federal tax law change does increase the relative tax burden for income income people in California), but up to this point, the wealthy seem willing to pay the costs of California's access to labor markets and beaches.

What is disturbing, though, is that low income people are moving out at the same rate they are leaving during the great recession, despite the fact that unlike in 2008, the unemployment rate here is at historic lows.  For economies to function, they need people like home health care workers and cooks, people who do important work but don't make a lot of money doing it.  The culprit for the exodus of lower income people from California is almost surely that there isn't enough housing here (the only state with fewer units per person is Utah, whose fertility rate is 30 percent higher than California's).  It is no longer the case that scarcity in housing is limited to Malibu and Beverly Hills--it is reaching San Bernardino and Riverside Counties, the traditional safety valves for inexpensive housing here.  When higher income people compete with lower income people for the same resources, the higher income people tend to win.
Posted by Richard Green at 3:38 PM