Is it reasonable for Angelinos to expect a shorter commute?

I have lived in LA for 11 years now, and I think it is safe to say that among the top topics of conversation is traffic and the misery of commuting.  And in a sense, people are right about
the fact that they have long commutes:  LA-OC Metro 2017 American Community self-reported average travel time to work ranks 246 among the 260 largest Metropolitan Areas, and share of people with a commute of an hour or longer ranks 231 (we will get to who does worse in a bit).  Thanks to Steven Ruggles, Sarah Flood, Ronald Goeken, Josiah Grover, Erin Meyer, Jose Pacas and Matthew Sobek, IPUMS USA: Version 9.0 [dataset]. Minneapolis, MN: IPUMS, 2019, who make it easy to download various data sets and play with them.

But should people reasonably expect LA to do any better than this?  Consider this plot of number of commuters in an MSA against average travel time (I looked to see if someone else had done this particular plot, and couldn't find anyone who has.  If I have failed to cite work already done on this, I apologize). 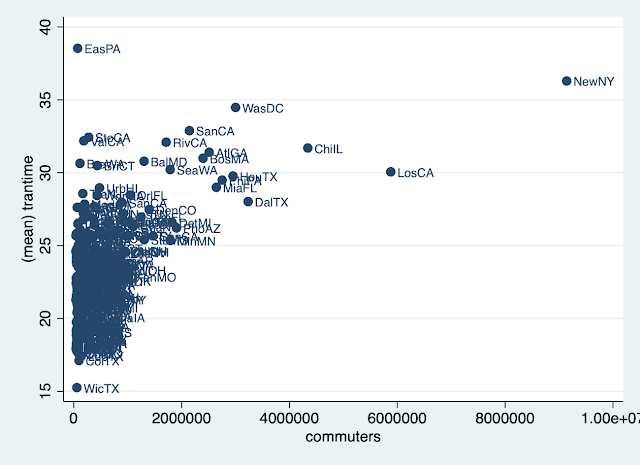 How does it do in context?  If we run a simple bivariate regression of number of commuters explaining travel time, we get this:

That is a lot of explaining for one variable--the t-statistic is 11 and the R2 is .32.  And I don't worry too much about getting the direction of causality wrong here.  The regression predicts that LA's commute should, given its size, be six minutes, or about 20 percent, longer than it actually is.  So it appears that people who live in Los Angeles and Orange Counties have shorter commutes than they should expect, given the very large size of their employment market (and there are large benefits to living in such large employment markets).

I should note that the scatter plot above looks quadratic, and so I also did the quadratic regression:

The addition of the squared term improves the fit, and so now we can explain almost 38 percent of the variation in commuting time with one variable.  It doesn't change the basic result, however, that LA's commute times are considerably shorter than its size would predict (although its commutes are five, rather than six, minutes shorter than the model would forecast).

So we who live in LA really have nothing to complain about with respect to congestion--we get agglomeration benefits from living in a very large city (Ed Glaeser, Enrico Moretti, Vernon Henderson, Stuart Rosenthal, Will Strange, Jane Jacobs, Alfred Marshall, and many, many others have written about the productivity and consumption benefits of living in a large MSA), and the congestion costs, while real, are relatively low.

But....this doesn't tell the whole story.  Look again at the scatterplot above, and one sees that the MSA with the longest commute is the relatively small Easton, Pennsylvania.  What is going on here?  Easton is a town immediately to the west of the Delaware River from New Jersey.  It is on Interstate 78, 68 miles to the west of the Holland Tunnel.  It is an inexpensive housing market.  And people commute from there to metro New York.

And so it is with Los Angeles. One place with fewer commuters than metro LA, but a longer commute, is Riverside-San Bernardino, the Inland Empire.  The Census counts people who live there as living in a separate metropolitan area, but they are in fact very much part of the Los Angeles regional economy.  And the people who live there have commutes that are more than 20 percent longer than the model predicts.  People who live out east may get some of the production externalities of the region, but I am not sure, after their exhausting commutes, that they benefit that much from the consumption externalities.

So I, and my neighbors, who live in Pasadena have no reason to complain about our commutes (cost of housing is a different issue).  Those who live in Ontario, on the other hand, have a point.