Such rent regulation often contains provisions which accord tenants improved security of tenure—rent increase appeal procedures, eviction procedures more favorable to the tenant, and so on—and it often includes restrictions to prevent cutbacks in maintenance, and on the conversion of controlled rental housing to owner-occupied housing.

Richard is one of the finest urban economists alive, and has taken the view that second generation rent control might do more good than harm.  This is certainly not Econ 101 gospel, but one one needs only to move onto Econ 201 to see where he is coming from.    If property owners have pricing power, the equilibrium rental rate could well be above the social optimum, and the quantity of housing produced could fall below the social optimum.  The idea that property owners might have pricing power goes back at least as far as David Ricardo, who worried about the corrosive effects of "economic rent" on social welfare.  It is certainly plausible to think that in a select few markets, such as New York and San Francisco, landowners do indeed have pricing power.  And this may argue for second generation rent control--but not the move toward first generation rent control, which puts tight caps on rent increases, eliminates vacancy decontrol, and imposes controls on new buildings.

Nevertheless, it is not clear to me that even second best rent control helps much with allocative inefficiency in markets where supply is inelastic--if there is a ceiling on the number of units builders can build, a price intervention is not going to bring about additional units.  So the issue is about redistribution.


Greene
have a nice white paper summarizing the literature on the winners and losers of rent control in the few jurisdictions where it exists in the US.  That literature shows that (1) rent control does indeed benefit incumbents; (2) does harm to those outside the rent control system (except, perhaps in Cambridge, MA); (3) probably reduces the stock of rental housing and (4) probably reduces the quality of the housing stock.  Diamond, McQuade and Qian find that the costs and benefits of San Francisco's second generation rent control (which has vacancy decontrol and no control of new buildings) are about equal.  This does not mean that this would be true for first generation rent control.

But even if second generation rent control is neutral in terms of costs and benefits, it doesn't necessarily lead to desirable distributional outcomes.  It is almost certainly true that the average property holder is wealthier than the average renter, and therefore that on average rent control redistributes income from higher to lower wealth people.  But rent control does not target the incomes/wealth of either property owners or renters.

We don't know much about the distribution of wealth among property owners.  We can turn to the US Census Rental Housing Finance Survey to see that nearly half of all units (and about 3/4 of all properties) are owned by individual investors.  Similar numbers are managed by either the owner herself or an unpaid agent of the owner.  So a substantial number of units are held by Mom and Pops.  According to the 2016 Survey of Consumer Finances, the median value of "equity in non-residential property (which includes residential properties with 5 or more units)" among those who hold such properties is about $70,000.  It is safe to say that a substantial number of owners of properties for rent do not have oodles of wealth.

As for the distribution of benefits to renters, consider the following graph: 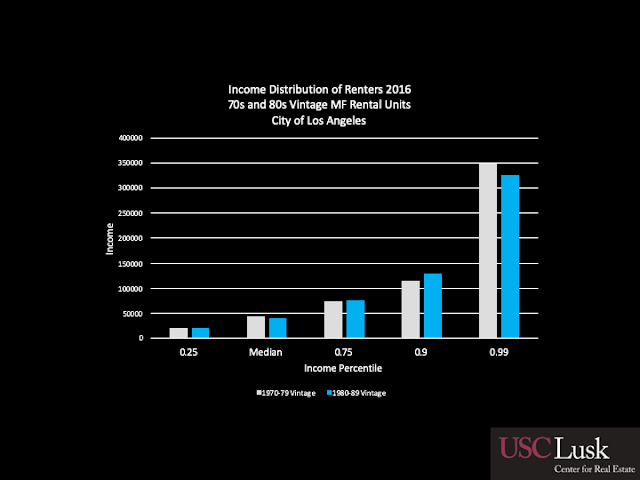 Rent control in Los Angeles applied to buildings constructed through 1978.  I took data from the 2016 American Community Survey (I know, I need to update it) to look at the income distribution of those living in buildings built in the 1970s (the best I could do to get at the newest rent stabilized buildings) and those living in buildings built in the 1980s (i.e., the oldest non-rent stabilized buildings).  Do you see a difference in these distributions?  Neither do I.  And to me, good social welfare policy is targeted to those who need help.

The thing that bothers me most about rent control is that it allows elected officials to say they are tackling housing issues in our most expensive MSAs, while they continue to punt on the issue of supply elasticity.  I am waiting to see more of our great cities take up the example of Minneapolis, whose government eliminated single family zoning in that city.  I would even be OK with cities combining temporary rent control with Minneapolis style zoning, knowing that in the presence of sufficient supply, people would ultimately no longer feel the need for rent control.  Rent control alone, however, just gives electeds cover not to fix the fundamental problem.

Posted by Richard Green at 4:50 PM